Owned and built by Brian Clayton & Jane Clayton we reserve all rights to remove or change any content  at any time. ©2021

Kick Up The Eighties

Geoff started his career at the age of 13 and within five years was one of the Mecca Group's top DJs, being used as their opening act for their new venue's nationwide. During the '60s when package tours were at the height of their popularity, Geoff could be found compering shows with Animals, Kinks, Spencer Davis, Roy Orbison, Chuck Berry, and MC'd for the second-ever Led Zeppelin show.

Come the late '60s, Geoff was on the radio with the BBC Radio and in 1974 became one of Radio Hallam's first voices when the station launched, being the new commercial station for Sheffield. In the '70s, Geoff also worked on Q102 in Florida, USA and KZUN in Dallas. In the '80s, you'd have heard him on the legendary pirate radio station, Sunshine Radio.

Geoff works together with Adrian Collis on Express fm who carry the twice-award-winning Soft Rock Show. This live show has reached a cult status and Geoff has interviewed over 1700 artists in the past 10 years, including members of the Eagles, Fleetwood Mac, Queen, Rolling Stones, Sir Cliff Richard, Genesis, Status Quo, Blondie, The Searchers, Slade, Toto, Rick Astley, Foreigner and Jethro Tull... and that's just the start of the list!

The show has carried a unique live link with Mix 94.1 in Las Vegas in the past, and now each month features a live link to The Hard Rock Cafe in Las Vegas for all the hottest entertainment news from Sin City!  The show continues to draw huge names to be interviewed both live on the telephone and in the studio and is Syndicated to 91 radio stations  in 20 countries.

Geoff also works for Forest FM, presenting a Soul and R&B show on Saturday in addition to All Our Yesterplays each weekday morning. He has also completed the Route to Radio broadcasting course, with credits. He now also records three unique shows - Solid Gold '60s, Supersonic '70s and Kick Up the '80s... all three of which are currently syndicated to 91 radio stations in 20 countries across the world.  Of note, in 2013 /14 and 15 Geoff received the prestigious GEO Award in Chicago for ‘Outstanding Contributing Programme’ for his Solid Gold ‘60s  show. With a further award in 2015 for Supersonic 70/s 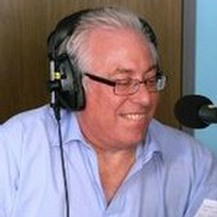